The first posting of ‘Food Discovery’ is ‘Nordic’ in Gyeongju. I went here during Gyeongju trip for my lunch with my roommates. Their food was quite good also their interior was fancy, too, so I decided to introduce it at my homepage.

Before start, I don’t like salty food and quite sensitive for it. Even I will write ‘salty’ several time, it might be not salty for you guys.

The building of the restaurant is quite old but the interior is really modern.

Since the building is quite old and the owner of restaurant remain the old ceiling so you can see Korean style ceiling that was common decades ago. Actually I saw this kind of ceiling 10 years ago at my grandma’s house and it was the last time before this restaurant. For Korean, we can feel familiar but for foreigners, it could be the chance to see new type of structure in very detail.

Even their exterior and ceiling are really old (or some people can think like boring) but their interior is really neat and modern.

I couldn’t take a picture of their door but there was a message ‘Modern Kitchen.’ I think they followed their slogan well. Interior was so neat and fancy including the drawings they displayed on the wall. I wanted to take pictures of them but after I met the foods they reserve, I couldn’t remember what I wanted to do because the food was look so pretty.

Upper image’s food name is ‘Grilled Sandwiches’ and the other one is ‘Nordic Salad’. It was 9,000 won and 16,000 won each. There were 3 or 4 menus and I wanted to order ‘Open Sandwiches’ but it was sold out. Anyway, taste was nice. As the combination of fresh fruits, vegetables and sausages, there is no doubt about their taste.

One of my roommates ordered Grilled Sandwiches and I tried it. There are 4 kinds of cheese in there and as you can imagine, it’s little bit salty. I think it’s quite good for side dish for beer. If you like salty food or cheese a lot, that dish would be good for you. For french fries at the side of the dish, it’s common kind of seasoned one with some salt and herb. (conclusion: little bit salty but not bad)

We ordered a cup of apple juice and it was not only apple also carrot, lemon, and something that I can’t remember now lol. However, the flavor was so nice. It was juice extraction and not that much sweet so you can feel the natural flavor. It was good combination with all foods we ate, especially the sandwiches.

Under the toppings, there is much amount of lettuce. Combining ingredients would be better than just eat them separately because some of them was little bit salty for me but after mixed them, it was good. Even on banana, there was herb seasoning so it wasn’t like natural by itself, after I ate it with a slice of egg, some lettuce, cherry tomato and avocado, it was not salty but perfect taste though. If I can have it everyday, I wanna do it. IT WAS SIMPLY REAL MY STYLE. I love it except seasoning. 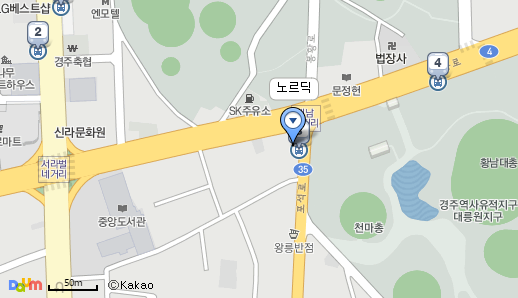 The address is 경북 경주시 포석로 1099, and really close with Daereungwon back entrance. Unfortunately, there is not information about Nordic on Tripadvisor site. I think when you show this map to any Korean around there, you might be able to get there. For me, I ate lunch at Nordic, got into Daereungwon, looked around there, came out through main entrance and there is Starbucks around main entrance so I took a rest for a while at there.

I hope you can get a nice meal in there and it can make your day!

Hopefully, have a nice day in Korea!